The Truth About Being a Game Tester

Hello,
I found this text in another website and translated to Portuguese so many of my readers could understand. Now I am posting the original one. 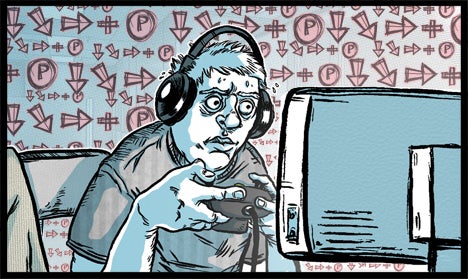 Hope you like it.
Many students dream of being a beta tester or game tester, someone who plays games for a living. It sounds like the ultimate job, right? You’re someone who enjoys playing games, and so what could possibly be better than sitting in a comfy chair, sipping on sodas, and playing games while getting paid for it? There are hundreds of websites and advertisements out there trying to lure unsuspecting students into programs and schools to become a game tester, and there’s even a TV centered around it. It’s such easy bait that many students buy into the dream, hoping to end up in what sounds like a perfect job.
(Blog’s Author: Now, this is when talking about USA and other places as far as I know. It is important to underline that here in Brazil that is not so common and we hardly see adds about how you can be a game tester.)

Unfortunately, being a beta tester professionally isn’t all it’s cracked up to be. Quality Assurance, or QA as it’s called in the industry, comes with a lot of negatives that students aren’t aware of as they pursue the rosy picture in their minds. I’ve worked with a lot of great people who are game testers, and while it may be a good career for some, for most of my students that I advise it’s no a wise choice. These are a few reasons for this, and there are some better options that I tend to steer students towards instead.

The first main drawback is that the work is actually not nearly as fun as you would think; on the contrary, it’s quite tedious. Students who imagine game testing imagine it being similar to when they have their friends over to play some games – sitting around, playing a few matches here and there, and trying out the newest games when they come out. Working in QA isn’t anything like this. The primary purpose of quality assurance is to find bugs and problems in the game, such as the game crashing, glitches in the images, or incorrect behavior. In order to find these bugs, QA has to play the game over and over and over again. For example, if you were working on Call of Duty, then when the first level was ready to play, then you would play through it. Then you would play through it again. And again. You’d try to do something slightly different each time, waiting for the game to crash. You will probably end up playing the same level literally hundreds of times. This is a far cry from the rosy picture most people have of testers and has a feeling much closer to assembly line work.

(Blog’s Author: Now, here comes something really important: Passion for games. It may be hard to do as he says, playing the same kind of level again and again, but you have to look at the real core of the business. You are playing video games as a job)
The second main drawback of being a pro beta tester is low pay. Of all the careers in games covered by the games industry salary survey done every year, QA consistently ranks the lowest, at over $26,000 lower than the next lowest discipline. Even leads and experienced QA personnel aren’t paid very much. This is a huge drawback when considering which path in games.
(Blog’s Author: This is something that I am going a little more further lately…)
The final drawback is that a career in QA has limited upward mobility. Some QA testers manage to move into other career paths like design or production, but most QA testers are stuck in QA for life, no matter how skilled they become. It makes it very difficult to move into another discipline, and since everyone wants to be a QA tester, there isn’t much negotiating power to move to other companies as well.

So what’s a gamer to do? In my career advising sessions with students and parents, I often advise them to consider a career as a pro beta tester or QA only after considering other paths first. While I have worked with many great people in QA, if you can become a designer, artist, or engineer, then you’ll be getting paid more, enjoy greater autonomy in your work, and have better mobility in your career.

Source: http://thegameprodigy.com/the-truth-about-being-a-game-beta-tester/
(Blog’s Author: Ok. Overall, I think Brice may be right in some aspects about being a Game Tester. One of the things is that he is taking the Game Tester as a JOB. (Of course it is a job!) But what I am saying is that many students that would like to work as a Game Tester want that because it is something -and it has to be in every job – fun. You have to enjoy doing it and you have to be happy of doing it. Think about it. You will have to spend 8 hours of your day doing that. It is more than 30% of your day, so you supposed to do spend it in something that you like.
Now, I do agreed with him that this work is not JUST fun. You will have to deal with bosses, coworkers, pressure, dead-lines, documents, pay your bills with the salary and may not be enough, deal with problems during the work, etc. And that is what people should understand when talking about Game Testing.
Overall, my opinion is that if you do something that you really like and enjoy doing, you won’t need to call it a job and the money and the rest will come naturally.)

The Truth About Being a Game Tester – II