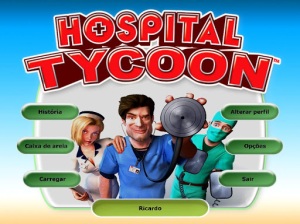 Companies like Codemaster, BullFrog and Deep Red Games are famous for many games that probably we all know. By Codemaster, for example, one of the oldest companies in England, we can name Collin McRae and Overlord, The Lord of the Rings Online and Toca Touring Cars. By BullFrog, we have Populous I, II and Populous: The Beginning, Theme Park, Dungeons Keeper, Theme Hospital, Theme Park World and Inc. just to name a few. Deep Red Games, on the other hand, has the all known Tycoons as SeaWorld Adventure Parks, Tycoon I and II, Vegas: Make it Big and Monopoly Tycoon. However, we all have a stage in our lives where things are not going so well and, trying to launch something bigger and much more interested in the market, we ended sinking our own ship. In this case, we are talking about the game Hospital Tycoon, which all the three named companies had the pleasure to give their contribution.
Released by Codemaster and produced by Deep Red Games, Hospital Tycoon seeks one really different way to mix famous Medical Series with a Real Life Strategy Game and some kind of The Sims mode. Still, here comes the question that you may be asking: What about Bullfrog? What is it doing in the middle of this? From the many games with the same objective and theme, we can say that one was used the most: Theme Hospital. Released by the quenched company BullFrog and, according to many critics, is it possible to see great similarity between the two games, both when talking about the mechanic and social interaction, playability, graphics, etc. We can also underline the frustrated attempts of the companies to include in the Tycoon games a few of theatral creativity, unfortunately with no outward success but fun.
But let’s dig a little bit more into the game itself. 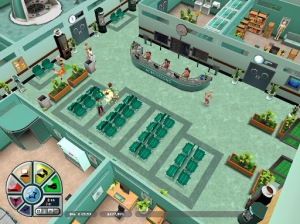 To start, you can find two modes to play. The History Mode and another one know as Sandbox Mode. The goal of the Sandbox is supposed to be and have fun. The player starts with an amount of money and enough space to build the hospital the way he wants without worry about winning or losing. The main idea here is to have play a lot and enjoy everything. Now, the History Mode works almost as a soup opera or a TV series. Here is where the trouble starts, as it were. The player has the opportunity, or not, to participate in the cut scenes between one stage and another, enabling an “interaction” with the characters and theirs plot as documents theft, controversy, lethal virus inside missing containers and more. Unluckily, you cannot wait too much from this tangle. A little few or almost nothing has anything to do with the player or the action that you do during the game, besides of little outcomes that may had come from TV series like House M.D., Grey’s Anatomy or even Scrubs, which are really boring to follow in the game. Why is Doctor Buffman hanging out with the hated one Nurse Dakota? Why Professor Brahms and Nurse Daisy are fighting in the research room? Why care about all these stuff if any of them will really interfere in your game? These are just for fun…or the attempt of it.
Another negative thing realized in the game was how the missions unfold themselves. The patients simple arrived at the hospital with a variety of diseases that should be treated. On this case, when the player understands the mechanism of how the game works, the actions are almost always the same. In other words, we have a patient that register, goes to a medic analysis, routed to treatment and go out of the hospital. Ok, it is not that different from a real hospital and more, but they should include some creativity in here. This is the reason that games are made for, to escape from reality and put some imagination to work. The player is taken, on this point of the game, to be considered as a real administrator that should solve all the many problems that every other hospital has. Now, to top everything, the greatest problem of all is that, at each scenario, you have to start all over again. Is it like you are a traveler administrator and have to fix all the hospitals in the country. For a game that you have to spend a lot of time to build something, that is actually really frustrating. 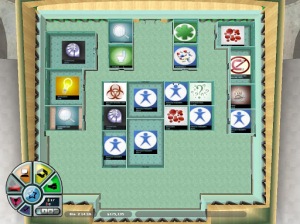 The interaction with the characters, when the objective of the game was a game like The Sims, got somewhat flaccid. The game allows you to do it, yet, the lack of goals at the proposed actions ended taking the user to nowhere. It doesn`t matter what you do, or who you talk to, it won`t reflect on your work in the game. Though, it is possible to create jobbery between the personages, hugs, talks, give heroic kisses, pokes, intimidate, but nothing of this at all is directly related to the playability as it should be. Making the long story short, it does not poke the game, being a waste of time really good planned. And the same interaction can be related to game-player development. The way all the individuals of the game speak, “Simlês”, is really annoying and repetitive, being possible to hear all the conversation in the game and even your own “conscience” which, in the beginning of the game, is reflected as the old owner of the hospital and he is passing on all the shores to you. Going further in the game, the secretary of the old man gets his place to help you out, with the same annoying way of talking and, time after time, she comes to tell you which are missions that you have to go through.
And, as we are talking about the playability, practically everything already comes prompt and pre-established. Rooms come with changing room and desks and the size of them are also specific for the equipment. You do not have to plan the space and where the room will be located. The furniture is also predestinated to be fixed. It doesn’t matter what you do, it is all the same and with a not so high variety. At the most, everything has already been 50% build it out (or even more) being only the player job to locate a few places as research labs of new diseases which, by itself, identifies alone the new disease on the patient only by testing him on the Diagnostic Machine. I mean, where is the challenge in that, but only to put the patient inside the machine. (Be careful not to go wrong on the unique machine). For sure an easy thing is, for the ones that are not so familiarized with the “God view” kind of game or real time strategy, they will find this really interested, because it gets really easy to move on the game. 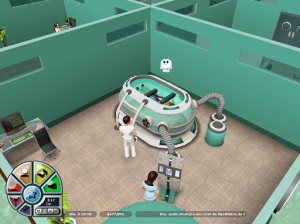 Also, talking about being easy, we have the money issue which, on the sad hand, is not a problem for the player. Actually, in some parts of the game, it is almost impossible to forget that you have money to spend. Everything that you do to build your hospital does not reflect in how much you earn. There is no need to worry about money, at all. You don’t have to count the outgoing, fire employees, sell machines or other desperate thing to make money and save your economies (except when the main goal of a specific mission is to do that).
Talking about graphics, we can say that, in some way of the path, something good was added. The game is really simple and clean. The rooms, machines and characters are in a cartoon style which brings an animated air to the game, extremely colorful and physically unique. Also the treatments are funnily exaggerated taking the doctors to use, as example, giant needles, large machinery and even a chair that prick balloons for a scare treatment (?). The diseases are also treated with a comedy air when comes to name, necessities and a variety of physic symptoms which gives the player a lot of fun. What about taking an acid shower or a treatment in the sample odor machine? At this point of the game, we can say that the creativity was absolutely great and we should give them some credits. But, as everything good, this was too good to last. The game sound was practically a shot in the dark. The theme, besides interesting, does not fits perfectly in the game and all the music are an infinite loop with pauses between them. You rarely pay attention to it and, for some times, you may prefer to put your own playlist going then to listen to the music; or the annoying voice of your helper. 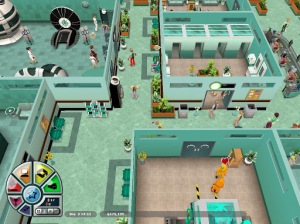 Overall, what we can say about Hospital Tycoon is that the game is practically semiautomatic, which drives the player to be more a spectator then a real player itself, not being necessary a real strategy to have success in the game or saving money. It virtually plays itself because of the many automatic items that were included in the game by Deep Red Games. Still, if you don’t have the skill to play a Real Time Strategy Game, this is the one for you!
One way or another then, here goes the tip: Do whatever the game asks and you will have no chance to lose! Ever!